The History department is a successful, positive and forward thinking team that constantly seeks to improve its practise and provide students with engaging, thought provoking and challenging lessons. Within the department there are three committed full time teachers; all of which bring something special to the department. Our core aim is to make history accessible and engaging to all young people. The department comprises of three classrooms, both equipped with interactive whiteboards and visualisers.

“Those who don’t know History are doomed to repeat it” History is a narration of the events which have happened in the past, including an account of the rise and fall of nations, as well as of other great changes which have affected the political and social condition of the human race. It is something that is constantly debated and affects the ways we live our lives today. 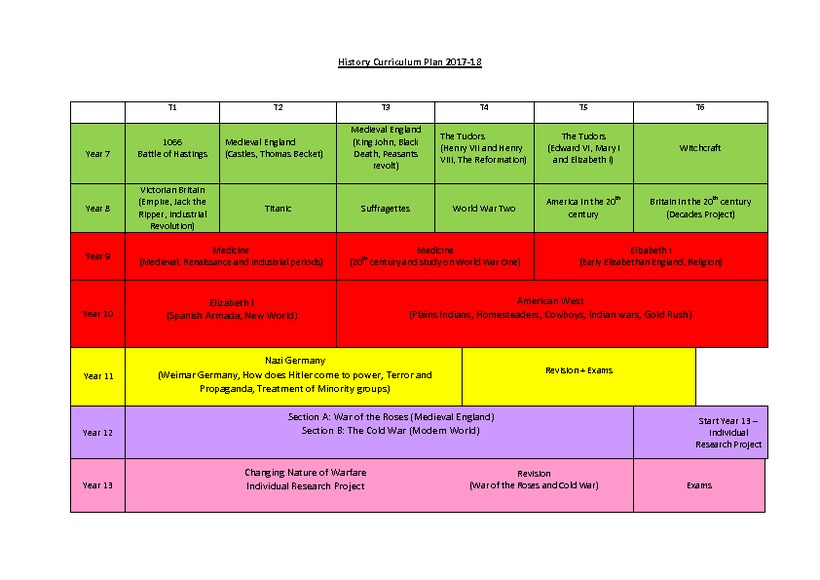 In Year 7 students start their study of History with the final conquest of England of 1066 and the Medieval period that followed; this includes the development of castles, the Black Death and the Peasants' Revolt. We then jump forward in time and study the Tudors to explore the differences between the different monarchs and the changing nature of the country’s religion. Year 7 ends with studying the Gunpowder Plot, English Civil War and then an investigation into Witchcraft.

In Year 8 students begin with a study on Victorian Britain. This includes the British Empire, the mysterious case of Jack the Ripper and the terrible tragedies of Slavery. Students then study twentieth century History; including the sinking of the Titanic, Suffragettes and World War 2. The Summer terms are spent learning about America in the 2th century (Civil Rights, JFK) and then Britain in the 20th century where they will complete a project on Britain from the 1950s up to the present day.

At GCSE students cover the History of Medicine in Year 9, examining how beliefs, values and understanding impacted upon treatments and public health. There is then a focus on Medicine in the Western Front and the improvements in surgery. From mid Year 9 to Year 10 Early Elizabethan England is studied, covering plots and rebellions towards Elizabeth and the Spanish Armada. Students then move on to American West, studying the westward expansion of White Americans and the impact that this has on Native American Indians. To finish the course students will study the rise and fall of both Weimar and Nazi Germany, including learning why Hitler was able to come to power. The GCSE course is fully examined at the end of Year 11 through 3 exams.

At A level, the skills used at KS3 and KS4 develop in to evaluation, interpretation and solid rigour with the A level specification. In Year 12 students study The Wars of the Roses, 1445-1509, with an enquiry focus on Henry VII.  Additionally students study the Cold War in Europe, 1945-1992, this centres around America and Russia’s relationship with focus surrounding the debates of what started and what ended the Cold War. In Year 13 students will cover The Changing Nature of Warfare, 1792-1945, with depth studies on the French Revolutionary Wars, the American Civil War and the First World War. Coursework involves an independent study surrounding a debate in History of 4000 words.

The History Department has run a variety of trips that enable students to experience History outside of the classroom. These have included trips to Chepstow Castle, the Imperial War Museum and an excellent trip to Berlin. These trips will be planned to be run in the future for History students to continue to enjoy.

After A Levels students can move into higher education. History is one of the most employable degrees; it can lead to careers in law, business, accounting, teaching and many more. It provides students with the essential skills of reasoning, debating and evaluating and complements other subjects such as English, Sociology and Politics.