Mrs Padfield is now “retired”, but was formerly a teacher of Mathematics, and later a Boarding School House-parent and Deputy Head.

She formerly lived and taught in Cheltenham, but has retired to Witcombe, where she is involved in the community and the Local Ministry Team, is Churchwarden and enjoys tennis, gardening and her 5 grandchildren.

To contact our Chair of Governors please email: clerk@asachelt.org or use the address:

Since qualifying as a teacher over thirty years ago, I have been passionate about quality education and the positive impact it can have. As well as teaching in secondary, primary, EYFS and adult education contexts, I have been involved in research and publishing, focusing on RE and Collective Worship. For the past seven years I have been part of the education team at the Diocese of Gloucester, where my role has included developing the educational offer at Gloucester Cathedral. I am currently the Strategic Lead for RE and School Christian Character.

I am married to Simon, who is a clergyman, and play an active role in church life. I have previously been a parent governor, Vice Chair and Acting Chair at Dursley Primary School. My three young adult children help to keep me grounded and I am a big fan of fell walking and glass fusing.

I am currently a Teaching Assistant and Assistant Tutor at All Saints' Academy. This means I work with many staff and students throughout the school. I am also an active member of the Anglican Church where I am the Coordinator of the Family Service Music Ministry, a member of the PCC and a member of the Deanery Synod in St Catherine’s Church, Gloucester. I also used to work as a Youth and Children’s Minister in Liverpool.

In my spare time I do ballroom dancing, play the Bass Guitar and sing. I have played the White Witch of Narnia in St George’s Hall in Liverpool. I have been involved in creating Bootle’s Biggest Banana Split, running Year 6 transition days in Liverpool Cathedral and leading Primary School Assemblies and workshops. 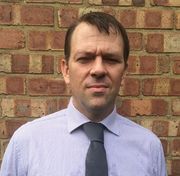 I am a parent of three children at All Saints’ Academy.  I am currently studying for a BA (Hons) in Arts and Humanities with the Open University, and on its completion to train to be a teacher.  My goal is to make a positive contribution to the work of the governing body from both a governor and a parent perspective.

Mrs Etheredge is a parent governor. She is on the welfare and ethos committee and has the role of special education needs and disabilities governor.

Having been brought up in Cheltenham, Mrs Etheredge gained a BA hons in Art Education Studies and then worked in Cheltenham library for several years before marrying and having eight children.

Three of her children are currently studying at All Saints’ Academy. The four eldest children are now at university.

As an adult Mrs Etheredge rediscovered her Catholic Faith through the Neo-Catechumenal Way, hearing through the gospel passage about the vine and its branches (John 15:1-10) how it is important for me to remain close to the Church. She is also interested in sharing her faith and in the spiritual life of the Academy.

Mrs Etheredge’s interests include: reading (especially children’s literature and history), walking in the countryside, playing the piano, painting and sewing.

Mrs Savory is the Director of Education and Deputy CEO at the Gloucestershire Learning Alliance, a multi-academy trust of 8 primary schools. She has been a head teacher achieving outstanding judgements in 3 inspections. Her leadership experience spans over 20 years.

Mrs Savory is an experienced NLE working across the southwest supporting leadership in schools that need to improve.She is also a facilitator for the NPQH and NPQSL qualifications and is supporting the new regional school improvement network group.

I have been Archdeacon of Cheltenham since 2017 when I moved to Cheltenham with my wife from Reigate in Surrey where I was a Church of England Vicar. In my role as one of two Archdeacons within the Diocese of Gloucester, I work closely with the Bishops in helping to oversee all aspects of the mission and ministry of the worshipping communities across the Archdeaconry of Cheltenham (which covers the Eastern half of the Diocese, stretching from the edges of Stratford Upon Avon to Lechlade to Tetbury to Tewkesbury), including schools and chaplaincies. Prior to being ordained I worked for a number of years as a Chartered Engineer, mostly in the UK Water Industry. I am passionate about helping people of all ages reach their God-given potential and Jesus’ offer of ‘life to the full’ in John 10:10 has long been an important verse for me.

Mr Watson is also in demand as a singer and musician in the local area, and is a member of the Oriel Singers. He is also an active member of St Gregory’s Parish Church.

Having graduated from New College, Oxford with a degree in Politics, Philosophy and mics, I started my career in teaching at Stowe School,  was a Housemistress to Sixth Form girls there before moving on to Canford School in Dorset to run a 13-18 day house. In 2001, I was appointed Admissions Tutor and then Senior Mistress at Dean Close Senior School and worked there for six years before taking up the Headship of Christ College, Brecon, the first female Head in that School’s 475 year history.

During my 10 years at Christ College, I oversaw the enhancement of academic results, expansion of school numbers, significant building work including new facilities for Science and Creative Arts, the opening of a Junior School and a partnership with a Malaysian company to open a sister school in Kuala Lumpur before returning to Dean Close as Warden / Chief Executive in August 2017.

I am an avid fan of rugby and cricket, I enjoy music and theatre, love to read and occasionally force myself to go running. My Christian faith is an important part of my life and I enjoy engaging in discussions about the relevance of faith to modern life, particularly the lives of young people.